40% of Reps Will Miss Quota And I Feel Fine

Like many of you, I attended Dreamforce last month. As is often the case, some of the most interesting conversations happen in the hallways between sessions.

During one of those conversations, I got pulled into a debate between two VPs of Inside Sales.

The question under consideration

VP #1 argued that the team wasn't properly led - essentially failure was on the sales leader’s shoulders. VP #2 countered that it was more likely territories were uneven and many reps were assigned unrealistic quotas - failure was on the shoulders of the sales planning organization. Having made their cases, they looked at me to choose a side.

Being a bit of a quant and card-carrying deliberator, I said I needed to look at some data and mull it over. I promised to post my thoughts here.

First, here are a few non-sales stats I dug up:

So perhaps if 40% of sales reps miss quota, there is no fault. Perhaps roughly 40% should miss.

Think of it this way.

The folks over at CSO Insights have done excellent work in sharing that, for years, the percentage of reps achieving quota has been roughly 60%. Jim Dickie was kind enough to share a preliminary CSO Insights number for all of 2013. We are right there at 57% making quota.

I’m working on a tool that will allow sales leaders to measure the health of their sales team. Until it's ready, here is a chart representing data from roughly 3 dozen companies who’ve shared their rep performance with me. It represents nearly a thousand inside sales reps and the distribution of performance vs. quota. 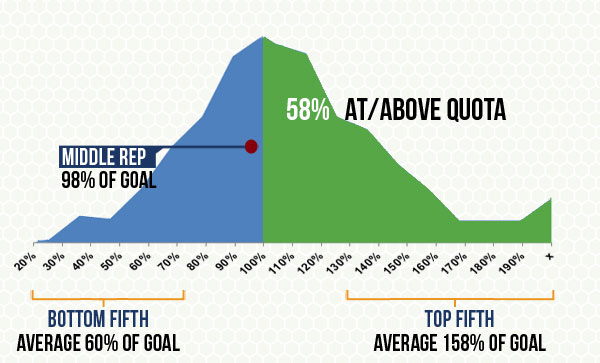 In my view, the percentage of reps hitting quota doesn’t separate high-performance from lame sales teams. As you can see from the chart above, there is a distribution of rep performance. Many reps who 'miss quota' are still at 90%+. On balance, overachievers make up for those who miss and the team goal is still achieved.

I’m not endorsing failure for reps, teams, companies, and/or our entire profession. But I am saying: If 40% (or even 50%) of your team won’t hit quota in 2013 and you still hit your team number, you’ve done your job well.

I know I haven’t really settled Kristin and Ed’s debate. But I hope I’ve made my point that lonely metrics (metrics in isolation) aren't incredibly meaningful.

Am I way off-base?

This is the part where you get tell me how wrong I am. I honestly want to know what others think. So please, have at it.